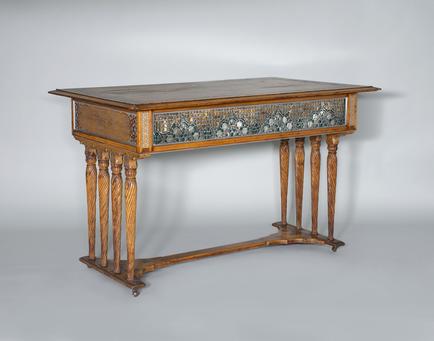 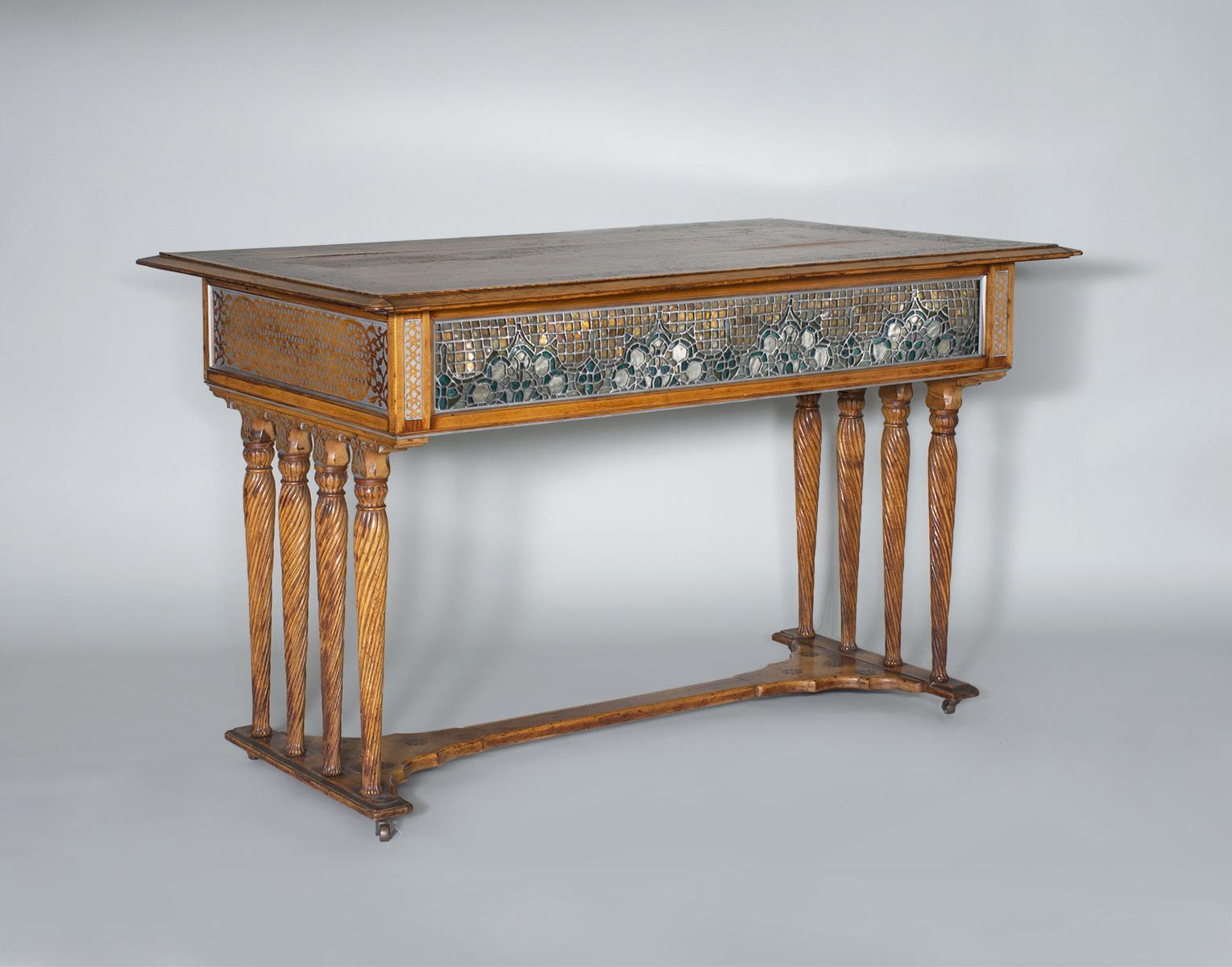 This is exceptional center table has been hidden away for over a century as it descended through the family of the prestigious 19th century New Yorker who originally purchased it in the early 1880s.

Likely dating to 1882, this table reveals the confluence of several significant commissions (in particular the Park Avenue Armory's Veteran's Room and the Union League Club in New York City) and Tiffany’s own experiments in glass production at a time when he was gradually distancing himself from Associated Artists and shifting the focus of his career to glass. The table’s apron features two inset leaded glass panels with a geometric design in the the Moorish taste. The glass panels are ingeniously reverse-painted with metallic aluminum paint, a technique that, when employed by Tiffany in leaded glass panels at at the Union League Club in 1881, gave an effect that was described as “similar to cloisonné enamel;” Tiffany obtained a patent on the technique in 1882. The same metallic paint is used to ornament the sides and legs of the tables, which are decorated with stylized geometric motifs also in the Eastern taste. The use of curly Maple, selected for its “beauty of grain,” echoes Tiffany’s choice of the same wood for the interior of his own living spaces at the mansion he and Stanford White erected for the Tiffany family on 72nd Street in 1882. Most importantly, in the early 1880s Tiffany struck a deal with a Brooklyn glassmaking company owned by Louis Heidt, allowing him exclusive access to the superior at opalescent glass required to produce the leaded glass panels that he was more frequently incorporating into his designs. is table expertly combines all of these elements to great effect.

The importance of this table in marking the creative development of Louis Comfort Tiffany cannot be overstated. Louis C. Tiffany & Associated Artists would close by the mid-1880s, while Tiffany would go on to form a series of companies under his own name in which glass would take center stage. This table, which integrates traditional elements from his work with Associated Artists with the experimental techniques and new materials that would later be perfected in his work with Tiffany Studios, could only have been made at this critical juncture in his early life and career. As Tiffany and his early collaborators began to drift, new access to manufacturing processes and artisanal prowess provided him with access to glass that was made to his exact specifications, enabling him to embark on his own career as a decorator and designer without associates and freeing him to follow his creative whims. us this rare table, both for aesthetic and historical reasons, must be considered a landmark in the oeuvre of the artist as well as American furniture of the mid- to late-19th century.
Contact us about this item

Site Index
Lillian Nassau LLC is committed to making its website accessible to all people, including individuals with disabilities. We are in the process of ensuring that our website www.lilliannassau.com is compliant with best practices and standards as defined by Section 508 of the U.S. Rehabilitation Act and Level AA of the World Wide Web Consortium(W3C)Web Content Accessibility Guidelines 2.0. These guidelines explain how to make web content more accessible for people with disabilities. Conformance with these guidelines will help make the web more user-friendly for all people. Copyright © Lillian Nassau LLC All Rights Reserved