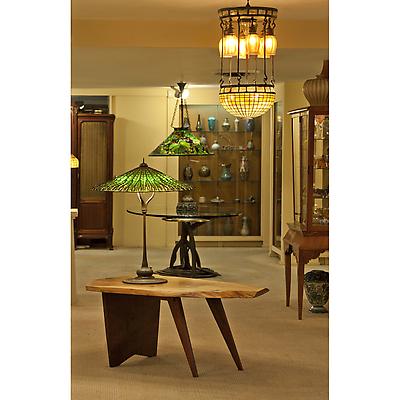 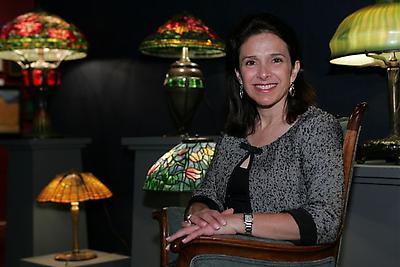 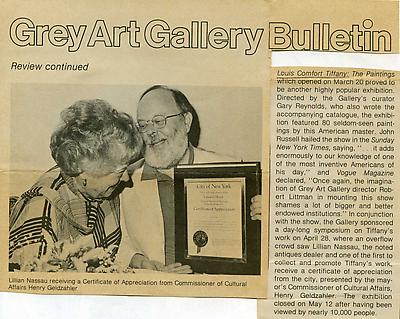 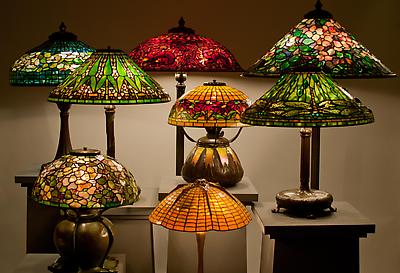 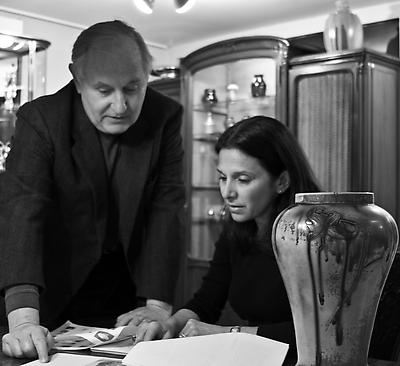 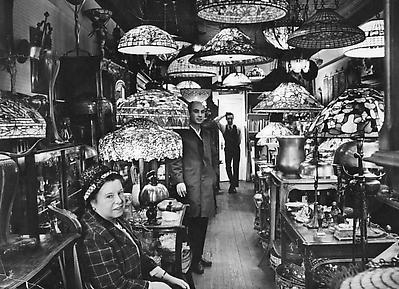 Adding to Lillian Nassau's specialization in the work of Tiffany Studios and Louis Comfort Tiffany is Gallery Director Eric Silver's expertise in American sculpture and Art Nouveau decorative arts, other areas for which Lillian Nassau LLC is known. Both Arlie Sulka and Eric Silver have been seen on the PBS Antiques Roadshow and look forward to participating in the upcoming 21st season.

Lillian Nassau opened her antiques shop in 1945 in New York City on Third Avenue between 54th and 55th streets, specializing in 18th and 19th Century porcelain, glass and objets d'art. In the 1950’s she became increasingly interested in the decorative arts of the Art Nouveau period and was especially fascinated by work of Louis Comfort Tiffany and Tiffany Studios. It wasn’t long until her inventory changed and she became recognized as the premier expert in the work of Louis Comfort Tiffany and Tiffany Studios.

Credited with almost single-handedly reviving the interest in the work of Louis C. Tiffany, Mrs. Nassau surrounded herself with trend setting collectors who shared her passion. Among them were Walter Chrysler and Joseph Heil, who gave generously to the Museum of Modern Art, Ed Wormley, the prominent furniture designer, and Edgar Kaufmann, Jr., whose family commissioned Frank Lloyd Wright to build their legendary home "Falling Water." In retrospect, it is difficult to believe that this now popular era of decorative arts had been forgotten.

Since little had been written about this period, Mrs. Nassau compiled a comprehensive research library that contained primary source material and included contemporary magazines, books catalogues and brochures. She shared her library and knowledge with these early collectors and museum curators.

As a willing lender to early museum exhibitions, Mrs. Nassau encouraged her clients to do the same. Her association with curators paved the way for two early exhibitions of Art Nouveau and Tiffany, the first held at the Museum of Contemporary Crafts in 1958 and the second, the seminal show at the Museum of Modern Art in 1960. Upholding that tradition, the gallery has continued to loan to museum exhibitions, most recently to "Tiffany Glass: A Passion for Colour" which opened at the Musée de Luxembourg in Paris, France, traveled to the Montreal Museum of Fine Arts in Montreal, Canada and then closed at the Virginia Museum of Art in Richmond, Virgina. Other recent loans include the Shelburne Museum, New York Historical Society in New York City, the Carnegie Museum of Art, the Dallas Museum of Art, the Toledo Museum of Art, the Seattle Art Museum, the Victoria and Albert Museum in London and the National Gallery in Washington D.C. Mrs. Nassau was the generous donor of the magnificent Tiffany Studios mosaic fountain that is permanently on view in the Sculpture Garden of the American Wing at the Metropolitan Museum of Art in New York, and she also presented the Metropolitan with a breathtaking necklace by Rene Lalique.


In 1967 the gallery moved to its present location at 220 East 57 Street. Although Mrs. Nassau was approaching the typical age of retirement, she was building momentum as the driving force behind the revival of the works by Tiffany and the decorative arts of the Art Nouveau and Art Deco periods. Celebrity collectors, including members of the Beatles, as well as Led Zeppelin, Catherine Deneuve, Barbra Streisand, Andy Warhol, and other leading pop culture personalities became clients and seized the opportunity to share in Mrs. Nassau's expertise while major museums throughout the United States and Europe steadily made major acquisitions from the gallery.

With over thirty years of experience working for Mrs. Nassau and her son, Paul, current owner Arlie Sulka is now considered one of the foremost experts on Louis Comfort Tiffany and Tiffany Studios, maintaining the gallery’s world-renowned status. Ms. Sulka has established enduring professional relationships with private clients and regularly advises leading museum curators from around the world.

Under Ms. Sulka’s guidance, the gallery has mounted a series of landmark exhibitions concentrating on the work of Louis Comfort Tiffany and Tiffany Studios including the lamps, blown glass and mosaics.

In 2020 the gallery celebrated its 75th anniversary.
Site Index
Lillian Nassau LLC is committed to making its website accessible to all people, including individuals with disabilities. We are in the process of ensuring that our website www.lilliannassau.com is compliant with best practices and standards as defined by Section 508 of the U.S. Rehabilitation Act and Level AA of the World Wide Web Consortium(W3C)Web Content Accessibility Guidelines 2.0. These guidelines explain how to make web content more accessible for people with disabilities. Conformance with these guidelines will help make the web more user-friendly for all people. Copyright © Lillian Nassau LLC All Rights Reserved